How to play Light tanks in WoT

Light tanks - are the first class of vehicles in World of Tanks from which everyone begins their acquaintance with the game. In the process of researching branches, many LT move into the class of ...

Light tanks - are the first class of vehicles in World of Tanks from which everyone begins their acquaintance with the game. In the process of researching branches, many LT move into the class of medium tanks, so at Tier 10 you can find only 6 top vehicles (Sheridan, Rhm.Pzw, T-100 LT, Manticore, Amx 13 105, EBR 105, WZ-132-1): 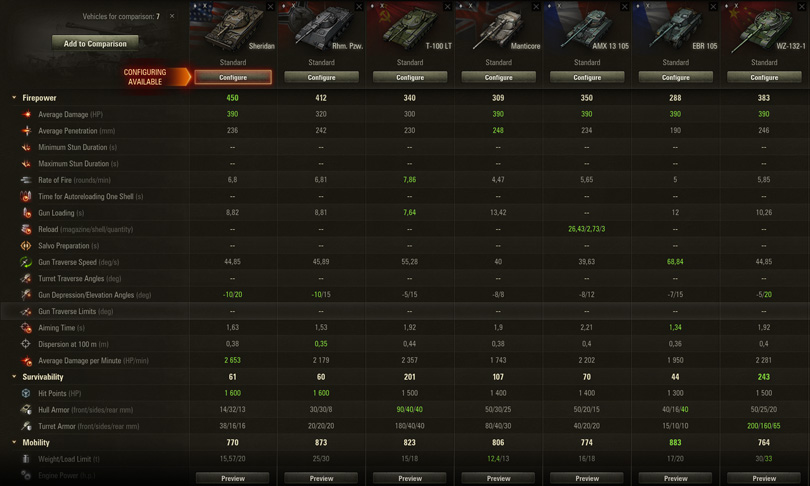 In patch 1.4, wheeled vehicles were introduced into the game starting from Tier VI. In the game, she is represented by five researchable armored vehicles.
Each nation's Light tank has its own unique performance characteristics that lay the foundation for its gameplay. Today we will look at the principles of playing on LT in order to understand how to most effectively fulfill our role. We will study the reconnaissance options and select the appropriate equipment for them.

Light tanks have the weakest firepower compared to all other tanks. Small one-time damage and too little armor penetration are the main features of the gun. But at the same time, LT provide us with the opportunity to test different types of guns: Here, the familiar Pz. Kpfw. II. Which has a 0.21 sec reload between shots, which turns the cannon into a kind of machine gun. The nuance of such guns is that due to poor accuracy and small caliber, it is impossible to hit the enemy from a distance of over 400 meters, therefore they are suitable only for close combat. The mount of such a weapon remains up to Tier V. 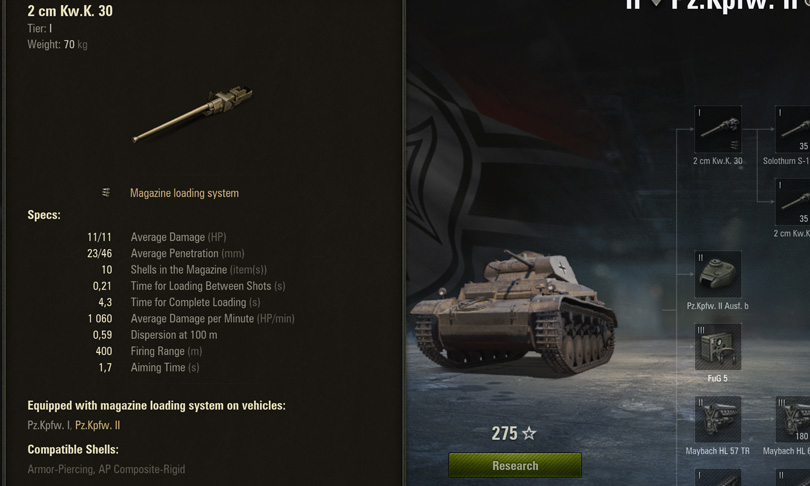 The magazine loading system distinguishes the French LT branch starting from Tier VI AMX 12 t. The reload time inside the drum is already longer than the initial levels of Germany, but the guns are more accurate and with a much larger alpha strike.
The American T49 is a one-of-a-kind LT, at the sight of which cardboard tanks try to hide and even armored TT are not eager to drive under its gun. 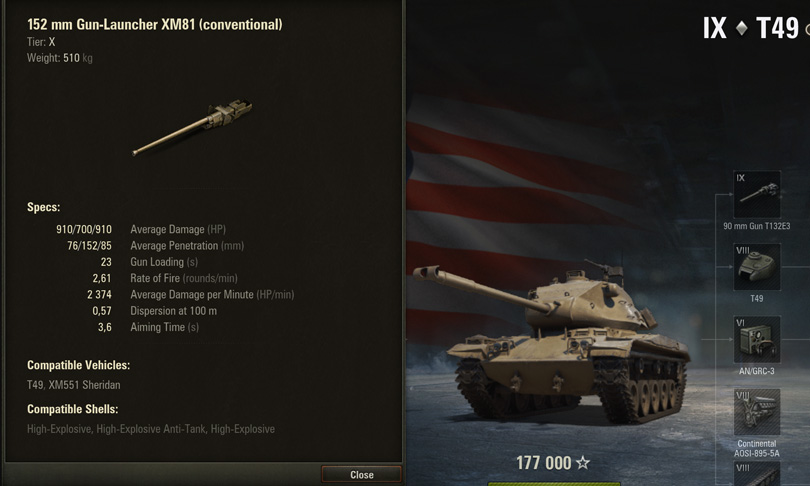 Reloading that is more common for all tanks, which is inherent in all absolutely all light tanks in China and the USSR, most of the USA and Germany.
Wheeled vehicles also have such a reload, but unlike all the others, they received a bonus as a magnetic sight, which automatically locks the target in a sector of +/- 10 ° from the direction of the gun.
Survivability is the main disadvantage of LT, because they have the smallest margin of safety (except for self-propelled guns, but they don't really need it) and weak armor. LT of France, Germany and the USA, having cardboard armor, almost always make their way. Soviet and Chinese light tanks have a more armored hull and a stronger turret, which allows you to sometimes hope for ricochets and cause more damage to classmates when ramming.

And now we come to the main features of light tanks: mobility, stealth and visibility. 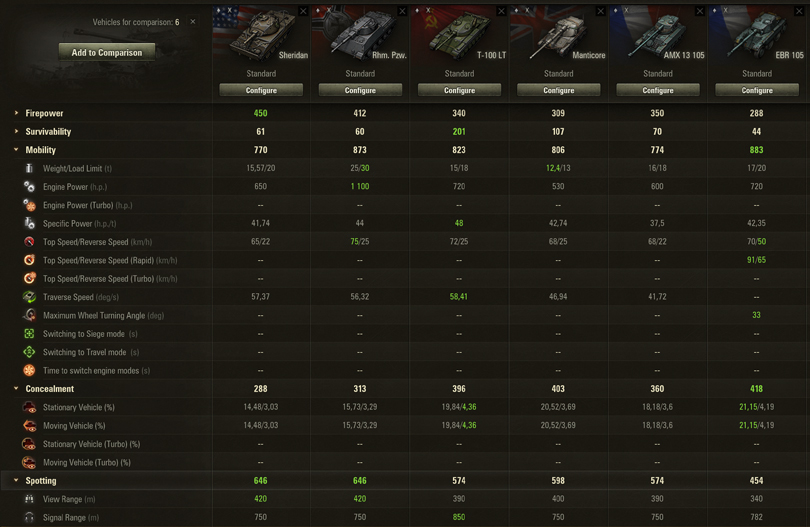 It is LT that have the highest maximum speed and the best dynamics. In the process of leveling, they also surpass single-tier vehicles in terms of visibility, but at level 10 all vehicle classes are approximately equal in terms of this indicator.

Armored vehicles have the smallest view, which is 350 meters even at Tier X.

The key feature of the LT was excellent camouflage, which is very important for successful reconnaissance. One of the advantages of light tanks stealth is that the concealment coefficient is the same when stationary and in motion.

Light tanks are the team's eyes and ears. Features of tactical and technical characteristics make LT the best scouts. A decent view makes it possible to detect the enemy at a great distance. Good dynamics allows you to take key positions at the beginning of the battle or maneuver, avoiding enemy shots. Excellent camouflage will allow, illuminating the enemy to remain invisible for a longer time, while allies will inflict damage on enemy vehicles in your spotlight.

Despite the weak firepower, LT can make a decisive contribution to the outcome of the battle due to the effective illumination of the enemy.

Light in World of Tanks - enemy detection. This is one of the most important aspects of the game, which, unfortunately, many players do not pay enough attention to. It's easy to learn how to tank on heavily armored vehicles or hit the enemy, but not everyone can provide the team with competent lighting and support it throughout the battle.

In high-level battles on open maps, it is the LT that is able to decide the outcome of the battle. A team left without reconnaissance will become easy prey, being defenseless against LT playing on allies. In such a situation, even heavy tanks will fold, because they will be defenseless against artillery.
Scouting in the game is divided into passive and active.

Active scouting fully justifies its name, as it implies constant movement around the map. It is necessary to be extremely careful and to be well oriented in the terrain, so as not to drive yourself into a hopeless situation by mistake. Constantly being on the front line, you need to realize that you are the number one target for the entire enemy team. 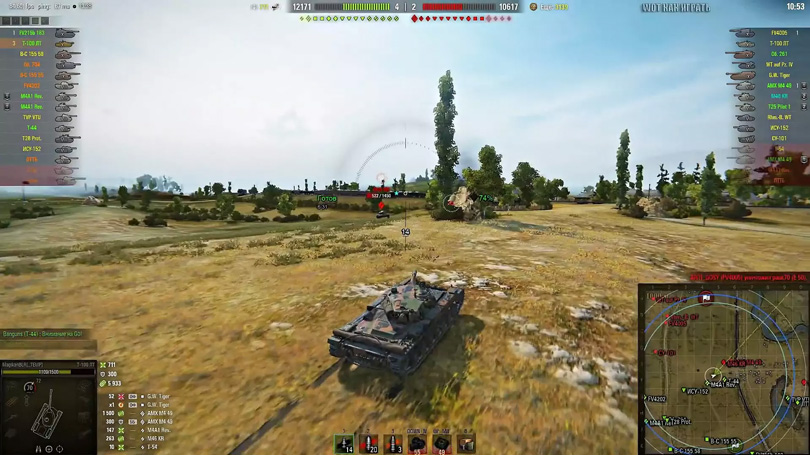 The key to successful scouting lies in the competent use of the relief: hills, depressions, mountains, dilapidated buildings. It is enough to expose only observation devices, it is not at all necessary to drive out completely. 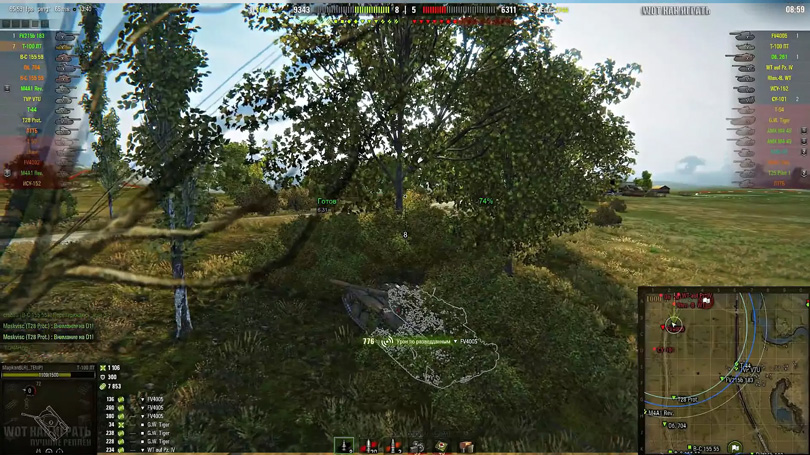 A common mistake that can be observed among beginners is that the scouting is simply a breakthrough to the enemy base, the detection of the enemy team, and after that the "woe-firefly" is sent to the hangar. At the same time, almost no one (except for the self-propelled guns) will be able to work out by his exposure, and his sacrifice will be in vain, and the team remains in a vulnerable position without a scout.

Give the initial light, it is important not to lose strength points by stupidity, and even more so not to merge. In the middle of a battle, a light tank is able to turn the tide of a battle if one of the teams was left without reconnaissance.

With active scouting, there is a high risk that you will be hit by a harp. You shouldn't save on the repair kit and wait for the repair. As such, the LT does not have armor, so standing still you simply turn into a target and will not hold out for 10 seconds under enemy fire.

Passive scouting consists in quickly taking an advantageous position (bush) and being in a stationary position, detecting an approaching enemy. It would seem that it is difficult here, but there are a number of nuances. It is important not to occupy any bush you like, but you need a position where the enemy team will strive to break through. 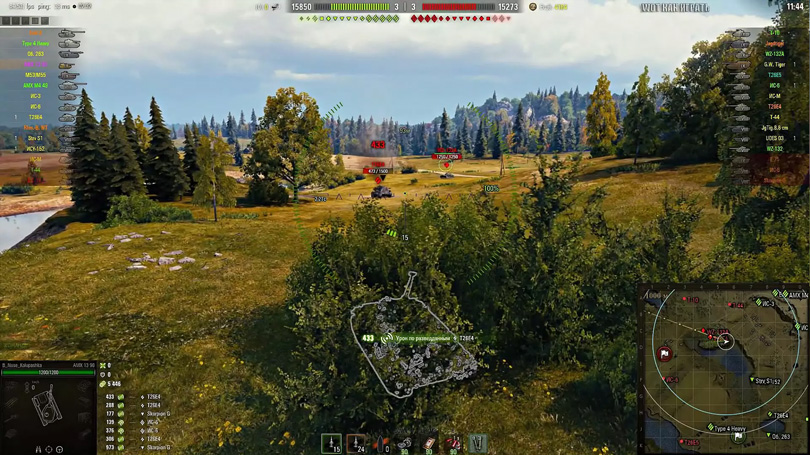 Therefore, it is extremely important to know the map and the main directions of movement of technology. In this case, you need to overcome the temptation and DO NOT SHOOT, otherwise, at best, just give out your location to the enemy, and at worst, highlight yourself, because shooting reduces camouflage.

In addition, you have to focus on your allies, because if no one can work out according to your intelligence, then this will not bring any benefit either to you personally (in the form of experience and money) or to the team. Therefore, passive light requires fire support.

Depending on the preferred playing style and the characteristics of the tank, the equipment is also selected depending on what kind of reconnaissance will be.

One of the most important perks of the commander, Sixth Sense, will significantly increase survivability. It is much safer to know that you have been noticed by the lamp than to realize it after a few shots of the enemy. Given the low safety margin, it is extremely difficult to play without this skill on LT.

The entire crew needs to study camouflage, as stealth is one of the most important metrics for every LT.

You can increase the view by 5% with the Situational Awareness and Recon. Combat Brotherhood will increase all the characteristics of the vehicle.

First of all, tactics in battle depend on the map. On an open map with active light, it is necessary to illuminate the passage of the enemy team, and after that, being on the front line, highlight the nearest enemy tanks. With passive scouting, it is necessary to take an advantageous position as soon as possible. Moreover, this must be done before the enemy LT from its side will take a similar position.

On city maps, the need for reconnaissance is not so urgent and more dangerous for the LT, because the escape routes are limited by the narrow space of the streets. In this situation, you need to play the role of a support tank. In most cases, penetration with a basic projectile will not be enough to deal damage to the enemy in the forehead, so you can shoot down the tracks. For damage done to an immobilized enemy, experience and credits are also awarded, as well as for scouting.

Special shells will help to equalize the firepower against the background of the rest of the vehicles being at the bottom or in the middle of the list, therefore, for a more confident game, it is recommended to allocate at least 30% of the ammunition for the gold.
It is important to keep an eye on the battle situation on the minimap. Good dynamics allows you to quickly move to a problem area, where you need to highlight the approaching enemy. If the situation is good, then you can rush into a breakthrough along the flank with allied medium tanks, or single-handedly break through to the enemy base for artillery.

At first glance, light tanks give the impression of the weakest vehicles: low firepower and weak armor. But it depends on the LT how the battle will proceed. With a competent initial scouting, you can destroy unwary opponents, and accordingly the enemy will lose "one barrel", which can subsequently save the life of one of the allies. If the LT survives until the middle and end of the battle, then thanks to visibility and stealth, it will be able to effectively finish off "shot" opponents, break into an enemy base, or return to defend its own.