Even an average player can make good stats, you only need to choose the right technique. If you want to improve your indicators to "green" or "turquoise", then this rating is for you.

Even an average player can make good stats, you only need to choose the right technique. If you want to improve your indicators to "green" or "turquoise", then this rating is for you.

Welcome, tankers! With you boost-hub and an overview of the best tanks to raise WN8 in World of Tanks. The skill level is quite important, at some point the player will want to join a good clan, but it is WN8 that will be the first thing to pay attention to. In order to knowingly raise statistics, maximum skills are not always important. A lot also depends on the choice of equipment. We have selected the TOP 5 tanks for leveling up the rating in a short period of time, after playing a few dozen battles, you will immediately notice an increase in the indicator.

In this article, we took level 9 as a basis, since it is here that the most comfortable fights are (middle of the list or top). And at the same time, there are tanks that are very sad in stock, and in the top configuration they are demanding to have gold shells, but they are the ones that best boost the WN8 rating.

Medium tank USSR is quite a dynamic tank, going into battle on it, you can not only raise the WN8 indicator, but also get maximum pleasure from playing on this combat vehicle. For many years, statisticians preferred the T-54 for its good DPM and booking. The tank is a ricochet tank, in order to receive bounces of projectiles, you just need to move, and at the moment of reloading the opponent, use a rapid-fire gun and fill in the damage. The penetration of the "gold" is not bad, it is 330 mm, it is aimed at the enemy, which is a level higher than the desired WN8 indicator will grow faster.

Do not forget about the glow of the opponent's tanks at the beginning of the game, this can be done especially well in the absence of a large number of LT in the team. Before moving to a position, you should run your eyes over the list of allied equipment and make the right choice regarding further actions.

He has a choice of 2 top guns: the first one has a higher rate of fire by 1 shot per minute, and the second one has better accuracy and armor penetration with the base shell.: 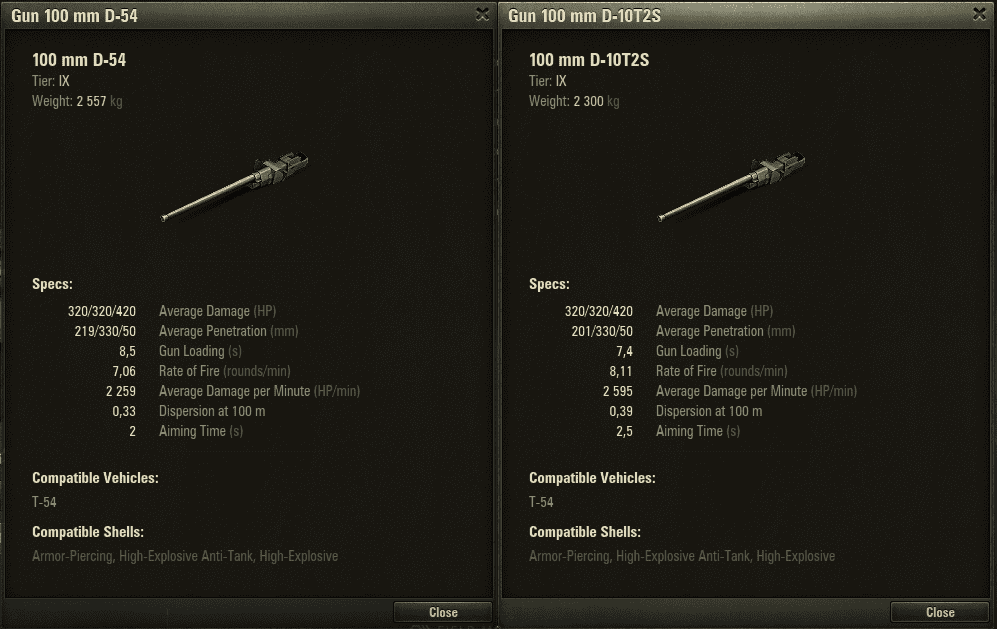 The main weapon of the medium tank is the DPM, which the T-54 has quite good, it is necessary to monitor the flanks and deal damage, and at the moment of detection, avoid retribution. It is equally important to surviveas long as possible, you should not stand still by tanking the tower, the upper hatches will easily be hit by experienced players, and if the artillery starts to "focus" the problems will become twice as big.

The level 9 medium tank in the top configuration has an excellent weapon, the penetration of the base shell is quite good and is 278 mm. From the "gold" ammunition, you can safely refuse and maximize the skills and abilities of the crew by loading additional packs for each battle. Silver will be spent efficiently, and the skill level indicator will start to grow with each battle. The damage from one projectile is 420 units, which allows you to go into a successful exchange even with some tanks of the 10th level.

Do not forget that Leopard Prototyp A is quite a "cardboard" technique, survival should be in the first place, otherwise it is impossible to talk about an early increase in WN8 indicators. The comfort and accuracy of the gun allows you to shoot from a long distance and play as a support tank.

None of the team members will write bad things in the chat for this style of combat, because it is risky to play this technique in a different way.

The dynamics are just great, you can take key positions quickly, and it doesn't take much time to change your location. Taking into account all the nuances, you can perfectly raise the statistics on this tank, but do not forget that the Leopard Prototyp A is a rather specific combat vehicle that will require maximum caution.

The main mistake of some players is to try to play the role of a classic medium tank at short and medium range. The leopard has poor stabilization (Cut in patch 1.10.1) and absolutely no armor, so many people foolishly lose precious strength points, which makes it impossible to deal more damage in the future.

The American medium branch is generally well suited for lifting the WN8, because there is a clear lack of armor penetration with the base projectile, and the accuracy is mediocre. Stock Patton is played on a cannon with 240 alpha and a 190 mm breakdown, so many beginners or those who play without donate take a long and tedious time to transfer it to the top, stuffing extremely low damage rates.

Its mobility is not impressive, there is essentially no armor, so the tank is not as comfortable as possible for pumping on basic shells and at the same time feels great on gold or when opening a top-end gun.

Germany's alternative Tier 9 medium tank E 50 received a good ap in the recent patch 1.10.1. Increased one-time damage on the stock cannon, and improved the top-end armor penetration to 230 mm. At the same time, we added armor to the tower, which will slightly increase the survival rate. You can tank "rhombus" or upper frontal part, fire from long distances, since the E 50 has a fairly accurate gun.

It is equally important to know that the tank has good performance for ramming: acceleration dynamics and mass. Therefore, if you have an opportunity, you should take advantage of this advantage if there is not enough HP left .

In principle, almost any LT is well suited for raising the rating, because many newcomers simply float into the light and merge without damage. Some simply "failed" in the class of light tanks, and some players are fixated on performing personal missions and sometimes merge statistics in pursuit of this.

The first thing you need to do is try not to die at the beginning of the battle, if possible, you should organize a good light, but when the situation gets heated, drive away and give damage. AMX 13 90 dynamic light tanks, it will be able to quickly change positions and productively not only highlight the opponent's equipment, but most importantly — the presence of a drum for 4 shells. To implement it, you will have to charge gold with 248 mm of breakdown on high-speed sub-calibrators. When you empty the magazine, you can deal about 960 points of damage.

You will only be able to boost WN8 score after choosing the correct techniqueon which the player is going to perform further actions. In this article, we looked mainly at medium tanks, as they can combine different gameplay (from active bursts, to gatherings in the bushes), while not being so exposed to the focus of artillery.

The main thing to remember about the gameplay features on combat vehicles. Only the right approach to gameplay will provide the desired increases in statistics. First of all, focus on dealing damage, even in a drain battle, try to live longer (do not rush to give up immediately) and make 2-3 additional shots. This is what distinguishes extras from ordinary players — they play to the end and do not switch off from the battle even with turbachs.