A British Tier 6 tank destroyer cannot be purchased in the Premium Shop, since this unique vehicle is awarded for completing all Personal missions 2.0 in Operation Excalibur. Those players who have already managed to get hold of this TD leave more than flattering reviews about it and agitate to complete personal combat missions faster in order ...

A British Tier 6 tank destroyer cannot be purchased in the Premium Shop, since this unique vehicle is awarded for completing all Personal missions 2.0 in Operation "Excalibur". Those players who have already managed to get hold of this TD leave more than flattering reviews about it and agitate to complete personal combat missions faster in order to try this miracle vehicle in battles. 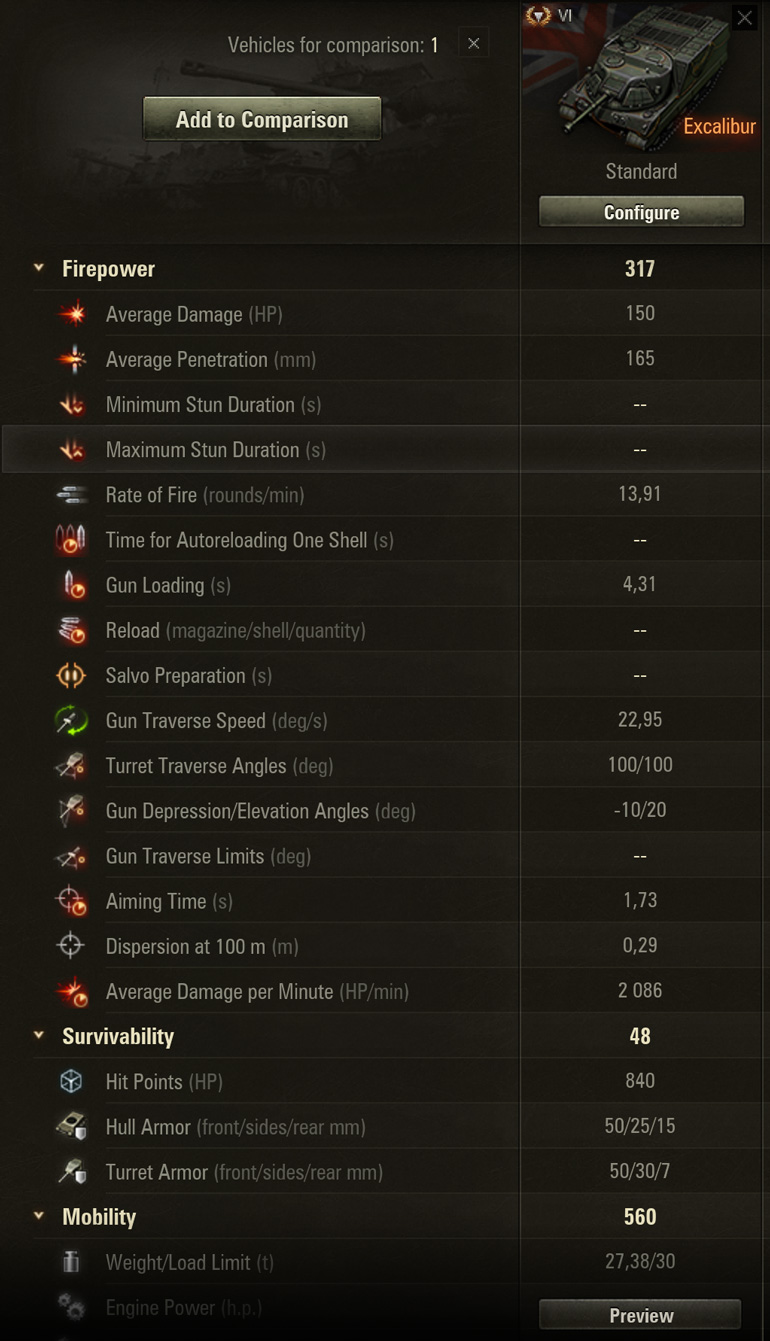 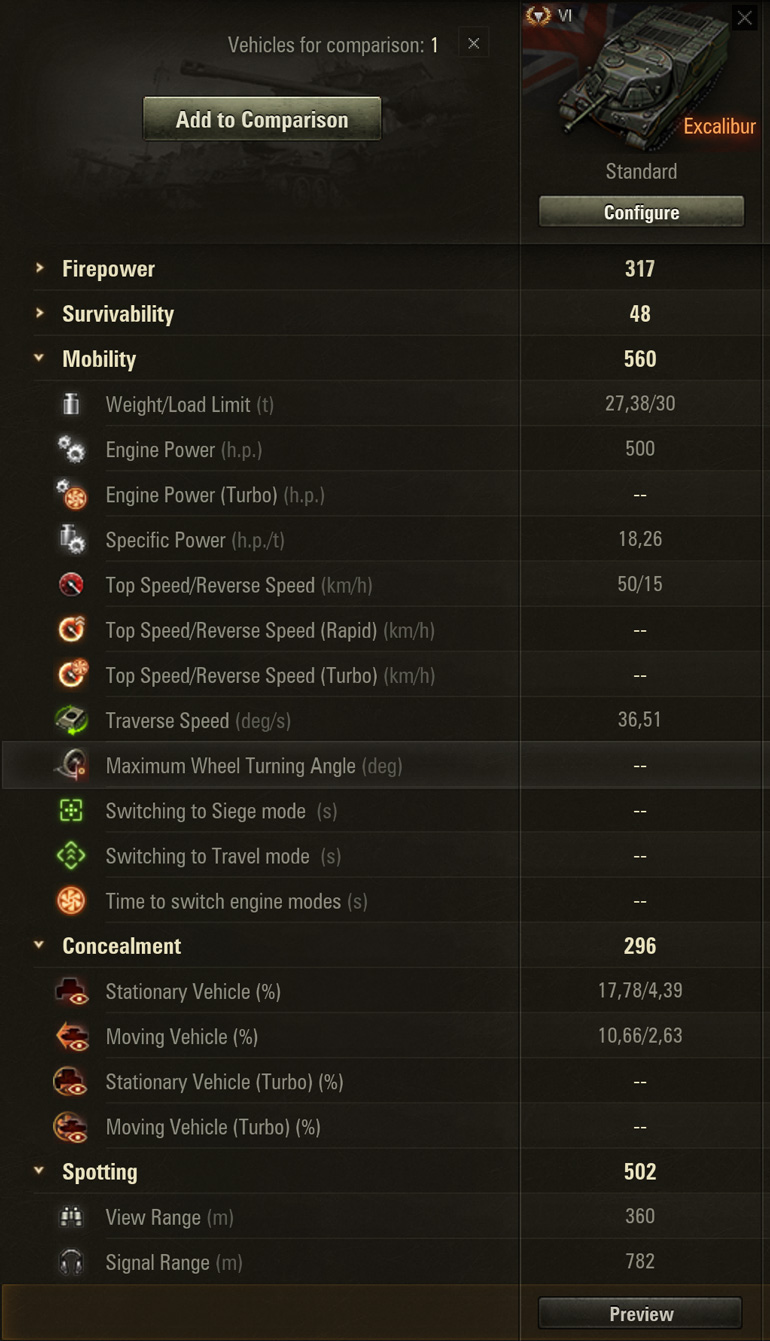 Before learning the perks from the crew, you need to familiarize yourself with the strengths and weaknesses of the tank. Recommended skills for the crew to learn step by step:

The Excalibur is not a simple tank destroyer. She has not only a powerful engine and rapid-fire weapon, but also has a turret that rotates 90 degrees in both directions. Of course, it is standard for an TD with no armor, first of all it is necessary to improve the concealment coefficient. Further, you need to increase the firepower, and for this you need to learn the skill of "Brothers in Arms" with the entire crew and "Smooth Ride" with "Snap Shot". This will improve reloading and stabilization of shots on the move. The rest of the perks can be learned by default.

The combination of equipment must be set as standard, as for a "ambash tank destroyer":

Gun Rammer will speed up an already fast recharge by 10%. Well, ventilation will improve all the characteristics of the crew by 5%. But with this combination, the British will be completely dependent on the light of the allied tanks. To change the position, you can install the following equipment:

Improved Ventilation, you can install a stereo tube. In a standing position, Excalibur will be able to independently conduct reconnaissance and detect enemy vehicles approaching positions.

How to play on Excalibur

It should be noted right away that this tank destroyer is armed with two guns, one of which is for high-explosive fragmentation shells. With 70 mm armor penetration, you can inflict damage up to 450 HP. At level 6, such armor penetration is very good, but the reload time is 14 seconds, which is a long period of time, and the DPM is less than that of the other gun. The 120 mm gun will only appeal to fans of large calibers and high one-time damage.

The main 76mm cannon is much more interesting. Small one-time damage is compensated by fast reloading. At the same time, the accuracy of the weapon is at the highest level. Aiming less than 2 seconds with a gun spread of 0.30 will allow you to regularly deal damage at any distance. Armor penetration of 165 mm will not be enough for playing against 8 levels, so sometimes you have to use premium shells. Otherwise, when shooting at long distances, the 76 mm gun will be more than comfortable.

It is worth noting immediately the not small silhouette of the Excalibur. This tank's camouflage is average, so it just needs to immediately upgrade the crew to camouflage and install a camouflage net. Without camouflage, this TD will immediately die when exposed, as there is no reservation.

The standard 360m view can be improved with the same perks and Binocular Telescope. Of course, the tank destroyer will not become a scout, but at least it will be able to independently spote enemy tanks on the way to the base.

As for the dynamics, this is the main advantage of the British. It is capable of reaching a top speed of 50 km / h in a matter of seconds, since the engine has a specific power of 18 hp / t. These indicators will save in certain situations, when you need to retreat to the base or quickly change position. 750 durability must be treasured, as they can quickly disappear when playing with 8 levels.

If you learn all the characteristics of the Excalibur, then you can understand that this is a ambush TD with a cardboard body. This vehicle cannot often be seen in the game, so you need to take positions only on the 3rd lane. An ultra-precise weapon will allow you to quickly and efficiently shoot back-lit enemy vehicles. It is also worth mentioning another plus of this British - the ability to tilt the gun vertically to -10 degrees. Standing in a position on the hills, playing only from the tower, in case of light, you can immediately hide from the lumbago and quickly change your position.

It is still quite early to work out the general impressions of this tank destroyer, since few players managed to play under her control. But judging by the tactical and technical characteristics, the British deserves his place on the podium for completing Personal missions 2.0: Second front. The TD has all the qualities for effective fire support to allies, as it has good weapons and dynamics.

Also, if you have any difficulties with completing personal missions, you can always order them from us and get the desired unique tank - Excalibur.